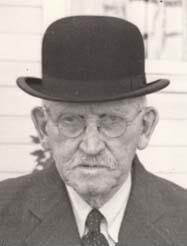 A.B. "Abe" Kenyon, 90, undertaker and furniture merchant, who has held the distinction of being Elkland's oldest resident since the death of Esbon Culver, 92, on April 17, passed away at his home here Saturday evening 9:00 o'clock. In failing health for the past few years, the immediate cause of Mr. Kenyon's death is attributed to a fall in his home about three weeks ago.

While the aged gentleman no longer took an active part in the business he helped to establish here fifty-one years ago, he was quite active for one of his age and was a daily visitor at the store until he was injured. In the declining years of Mr. A.B. Kenyon, and since the death of C.L. Kenyon, the Kenyon Brothers establishment here has been in charge of T.A. Kenyon, son of C.L. Kenyon.

Deceased had been active in affairs of the community, serving as chief of the volunteer fire department and member of the Borough Council. He was a member of Osceola Lodge, No. 421, F&AM.

Two nephews Thorne Kenyon of Elkland and Horace Kenyon of Troy, Pa., and niece of Mrs. Mabel Wells of Troy are the only survivors.

Funeral services were held Tuesday afternoon at 2 o'clock from the Kenyon Funeral Home which the deceased had helped to establish. Services were in charge of Rev. E.T. Rowe and burial was made in Highland Cemetery at this place.

A year ago, on the anniversary of the establishment of Kenyon Bros., at this place, the aged gentleman gave the Journal an account of his life and activities. Looking back over the years, he said that the two brothers were partners in a furniture store and undertaking establishment at Sylvania, Bradford County, Pa., when a traveler told them about bright prospects for a business at Elkland and Osceola, where lumbering and affiliated industries were attracting many families.

The Kenyons were skilled cabinet makers, as it was necessary for undertakers to build their own caskets when these men started business.

In June, 1889, when waters of a disastrous "June Flood" were still raging through the valley, the Kenyons came to Elkland and Osceola to inspect possibilities. Osceola, the older of the two towns with a larger population, presented more promising business possibilities. They were urged to locate at that place, but with a true evaluation of future possibilities they selected this town and established Kenyon Bros. store and undertaking establishment in a building rented from George Signor, then proprietor of the present Hotel Signor.

The building in which they became established was situated on the site of the present Western Auto Supply Store, and was formerly a Presbyterian Church which had been moved to the site to permit the building by Presbyterians of a larger house of worship.

In connection with the Kenyons' first visit to this place, it is interesting to note that hotels and all accommodations for travelers were filled. The brothers found quarters with the family of James Ring, the same house in which Mr. Kenyon died Saturday night. This house, Mr. Kenyon told the Journal, was the former Joel Parkhurst residence, which, like the church property, had been moved to permit the building of more pretentious quarters. The house later became the property of the Kenyon Bros., and as a two-family apartment was occupied by the brothers and their families for a number of years.

After about three years in the Signor property, where in connection with the furniture and undertaking business the brothers built and trimmed many caskets, and constructed their first horse-drawn hearse, the Kenyons moved to other accomodations in what was then known as the old roller skating rink which stood on the site of the present Borough Building.

It was in the old rink building that C.L. Kenyon formed a partnership with E.B. Crandall for the manufacture of cigars from Cowanesque Valley produced tobacco. Cigar makers were employed working under the supervision of a man named Frank Sacks, chief cigar maker and a portion of the rink building was converted into a cigar factory. Asa Smith, late of Woodhull, N.Y., a cousin of the Messrs. Kenyon, was employed as salesman.

Cigar brands produced were "Havana Buds", "After the Ball" and "Deacon". The latter, the "Deacon," got its name from the nickname with which C.L. Kenyon was christened by George Signor. Shortened to "Deac," the nickname is still carried by T.A. Kenyon, present proprietor of the business.

As the communities of Elkland and Osceola continued to grow, the old roller rink quarters became inadequate, and in 1897, the Kenyon Bros., erected the present store building on the site of a former blacksmith shop and livery stable.

A year ago, when on the fiftieth anniversary of the coming to Elkland, the late deceased gave the above account of his life, it was with pride that he looked back over the years to the old church building, roller rink and hand-made hearse, and compared early methods with present modern facilities offered by the business which now bears his name.