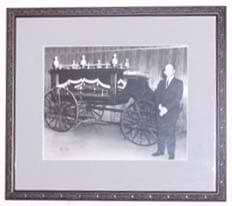 The William Penn Memorial Museum, which is Pennsylvania's state museum, was recently give two horse drawn hearses. One, a circular child's hearse which dates back to 1875, was the gift of W. Robert Neff of the Neff Funeral Home in Howard Pennsylvania. The other, a vehicle that could be used either with wheels or sleigh runners, was donated by Charles L. Kenyon of the Kenyon Funeral Home in Elkland, Pennsylvania. Mr. Kenyon is the grandson of the cabinet maker who built the vehicle.

The purpose of this museum is to depict the various aspects of life and culture within the Commonwealth. Irwin Richman, who is chief of the Section on Science, Industry and Technology of the museum indicated the cooperation of the Pennsylvania Funeral Directors Association is appreciated because the museum is cognizant of the social and historical importance of the funeral.

The Kenyon Brothers were skilled cabinet furniture makers. While they were at Sylvania they built the funeral case and installed it on a wagon built by Charles Waldo.

The brothers gave up wood-working after establishing their Elkland business and turned their attention to community leadership and undertaking.

By 1894, they were ready for expansion and opened the present funeral home, the most lasting in the entire Northern Tier. "A new, custom built, factory made" hearse was announced shortly after the new funeral home was opened. Few, if any, other undertakers in the hills had such elegant carriages. The vehicles were maintained and sheltered with the Kenyon horses in a stable behind the furniture store. For a short period the Kenyon horses were also used to draw the steam fire engine for the village.

Older residents can still remember when the fine, horse drawn hearses went up Cemetery Hill at every funeral. It is further recalled that Kenyons used the vehicles after others turned to gasoline powered funeral cars. Perhaps that is why the Elkland hearses were sheltered and preserved after other undertakers discarded funeral carriages.

Charles L. Kenyon died in 1936 and his brother, Abraham, died in 1941. Thorne A. Kenyon, the son of Charles, assumed proprietorship of the business. T.A. died in 1964 but he, too, had preserved the relics of another day and being something of a wit, polished the hearses for their last public display in the Centennial Parade of 1950, the lettered one of the vehicles "The Last Ride of the Gay Nineties." The lettering was still on the little hearse when it was sent to the William Penn Memorial Museum.

The advertisement was illustrated with a wood cut of ornate glass hearse and spirited horses, with "Abe at the reins and "Lel" at the casket door. 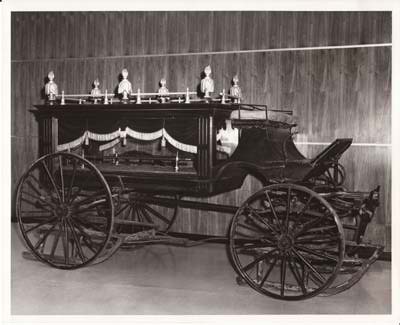 This large funeral hearse was the pride of the Kenyon Funeral Home before 1900. It has been donated to the Farmers Museum at Landis, PA. as a perfectly preserved piece from the 19th century.